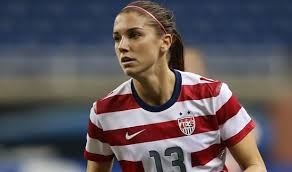 Women’s sports is on constant evolution. It is catching more and more fans in this recent years; beauty is often hypnotic and irresistible.

Soccer is traditionally occupied by men who tend to approve for female presence in this field. However, women have found it liberating and gave them purpose besides daily life.

The number of professional women who are already in field of sports is increasing, and we was able to sort out a list of those female beauties.

Alexandra Patricia Morgan Carrasco, born on July 2 1989 in San Dimas, is an national American soccer player. She is an Olympic champion in 2012 with the USWNT and world champion in 2015 and 2019.

Jonelle Filigno is a Canadian soccer player (striker). She is a member of the Canadian female soccer team.

Hope Amelia Solo is The American soccer team goal keeper where she became Olympic champion in 2008 and 2012 and world champion in 2015.

Laure Boulleau, born on October 22 1986 in Clermont-Ferrand, is in the national French soccer team left winger in Paris Saint-Germain between 2000-2010.

Heather Blaine Mitts Feeley is an American soccer player as a defender. She was member in the national American team. After that, she announced her retirement through a Twitter post.

Louisa Necib, Cadamuro’s wife, born on January 23 1987 in Marseille, is the national French soccer team mid-fielder. Eventually, she retired while she was playing for Olympic Lyonnais and playing for the French team in the Olympic in 2016.

Kyah Simon, born on June 25 1991 in Blacktown, is an Australian soccer player originally an aborigine as a striker. She is currently playing for Boston Breakers.

Alexandra Blaire Krieger, more known as Ali Krieger, born on July 28 1984 in Alexandria, is the mid-field defender of the American soccer team. Her current club is Orlando Pride in The NWSL.

Liasa Dahlkvist was born on February 6 1987 in Stockholmg. She is the swedish soccer team mid-fielder. She plays for Paris Saint-Germain.

Kaylin Kyle, born on October 6 1988 in Saskatoon in Saskatchewan, is a Canadian Soccer player who holds mid-field position. She plays for Seattle Reign and member of Canadian National team. She is an Ambassador for the Right To Play organization.

Next post
Back to Top
Close
Manage Cookie Consent
To provide the best experiences, we use technologies like cookies to store and/or access device information. Consenting to these technologies will allow us to process data such as browsing behaviour or unique IDs on this site. Not consenting or withdrawing consent, may adversely affect certain features and functions.
Manage options Manage services Manage vendors Read more about these purposes
View preferences
{title} {title} {title}